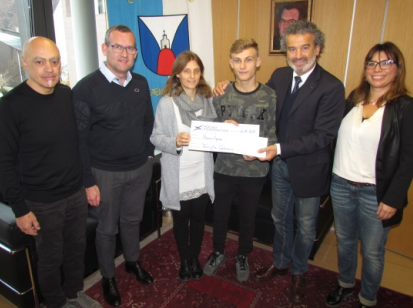 The Podini Foundation decided to carry out an “extraordinary” activity compared to the methods in which it usually intervenes by deciding to help Ms. Catalano whose husband has lost his life in a tragic accident at work leaving her alone with four children.
Having heard of a solidarity initiative organized by a group of citizens of Laives (where the family lives), I and the other members of the Foundation were impressed by the spirit of solidarity, humanity and the unity of the lady’s fellow citizens and so we decided to take a small step.
We wanted to contribute to the lady’s grocery shopping by donating a € 500 voucher at the Poli supermarket in Laives.
The official delivery of the support took place on Friday, November 24, 2017 at 10:30 am in the municipality of Laives in the presence of the mayor of the country, Christian Bianchi, of the representative of the Podini Foundation Stefano Podini and Ms Catalano.

23.10.2020  - These days the free shuttle service operating in the Bolzano cemetery turns one…

PODINI FOUNDATION SCOLARSHIP: LEARN FROM NEEDS OF OTHERS

THE FREE SHUTTLE SERVICE TO THE BOLZANO CEMETERY IS STARTED